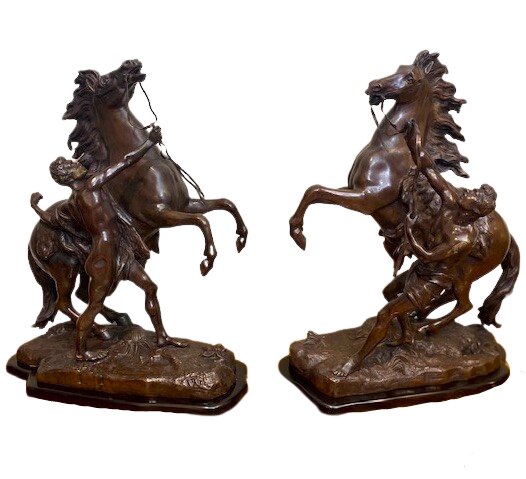 Move your mouse over image or click to enlarge

This beautiful impressive pair of patinated bronze statues depict rearing stallions, being attended to by a male handler, wearing only a draped cloth around his waist.  Both on black wooden bases.

This model of a horse restrained by a groom is known as the Marly Horses because they are after the famous 17th century Carrara marble sculptures by Guillaume Coustou (French, 1677 Lyon -1746 Paris), commissioned in 1739 for the horse pond in the gardens of the Château de Marly. Coustou was probably inspired by the antique statues of the Dioscuri with their rearing horses in front of the Quirinal Palace in Rome, but above all drew inspiration from nature, studying the movements of men and horses from live models.

Since they were originally executed the horses were considered masterpieces and were spared the fate of the Chateau de Marly, which was destroyed during the French Revolution. In 1795, they were placed at the bottom of the Champs-Elysees. They were moved to the Musee du Louvre, Paris (M.R. 1802-3) and replaced by copies in the Place de la Concorde and at Marly.  Soon after their execution, the Marly Horses were reinterpreted in various mediums, including patinated bronze. One such example can be found in the Royal Collection.