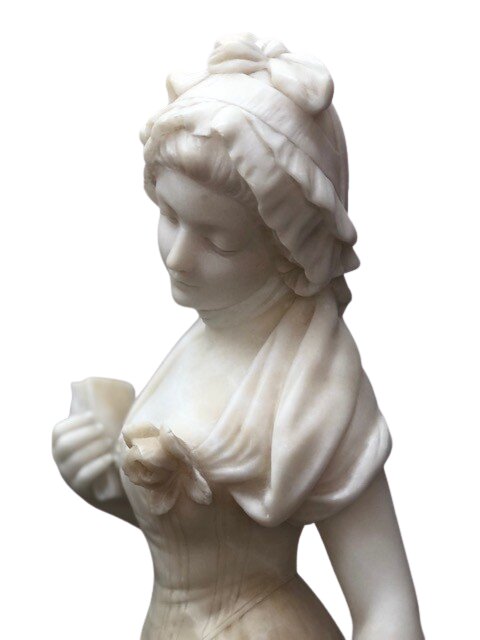 Move your mouse over image or click to enlarge

Alabaster Sculpture of Young Lady by Hippolyte Moreau, French, Circa 1880

Exquisite Alabaster sculpture of a young lady by Hippolyte Moreau.  She is holding a book in one hand and a bunch of flowers in the other, wearing a pretty dress with a flower corsage and a bonnet.

A very fine carved figure, signed by the artist.

François, known as Hippolyte, is the second son of the sculptor Jean-Baptiste Moreau and the brother of Mathurin and Auguste, also sculptors. The three brothers studied in their father's atelier, then moved to Paris to study with François Jouffroy, a sculptor from Dijon, who in 1863 began teaching at the École Des Beaux-Arts. His cousin was the painter Paul Chocarne-Moreau. From 1863 to 1914, Hippolyte exhibited his works at the Salon des Artistes Français. He won a medal at the Paris Expo of 1878 and another one at the 1900 Expo. Moreau mainly produced works of medium or small size (including often female or children's figures inspired by the 18th century, and rich in symbolic or allegorical meaning) or decorative and commonly used objects such as: vases, statuettes, letter openers or valet trays, in bronze. Many of his works are now kept at the Musée Des Beaux-Arts in Dijon.